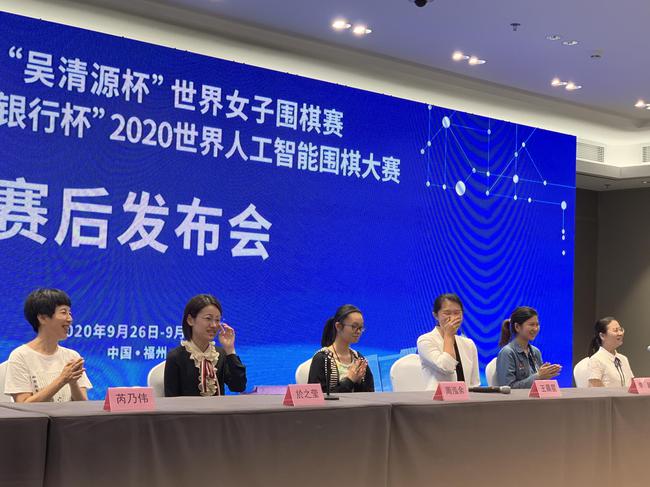 The first stage of the 3rd Wu Qingyuan Cup World Women's Go Tournament that has just ended has achieved a great victory for the Chinese Women's Army. Pulling the time back to the evening of September 29, two days ago, the Wu Qingyuan Cup quarter-finals were played in Changle, Fuzhou. As a result, Rui Naiwei, Yu Zhiying, Wang Chenxing, and Zhou Hongyu played the top four and took the top four. They were in the third year of the Wu Qingyuan Cup. On the occasion, finally left the champion in China. After the game, the four female chess players took a group photo on the top, and they smiled like flowers, blooming like blossoming jasmine.

At the beginning of the press conference, head coach Yu Bin first concluded: "Last year our women’s international competition was unsatisfactory. Neither the team nor the individual won the championship. In addition, the Wu Qingyuan Cup lost the championship in the first two sessions. The coaching staff of the national Go team The pressure is very high. Today we finally won the semi-finals, which shows that we still have the strength to achieve better results, and finally prove ourselves with the results. In addition, I see that Mr. Rui Naiwei is still very strong and it is very easy to enter the semi-finals. I I hope that the four chess players here will continue to achieve good results."

The players first made a brief summary of their performance and the second stage outlook. Zhou Hongyu: I don't know how it was at the beginning of today's game of chess. But I know I'm better when I enter Guanzi. For the next stage of the competition, I will work hard. Wang Chenxing: I am quite satisfied with this game of chess today. At least I played my own level. I played well in this game overall. In the semi-finals, I don't think I have met Xiao Yu'er in the semi-finals for a long time. I am looking forward to the semi-finals and hope to play well.

Yu Zhiying: Today's game of chess has always been chaotic. Both sides are similar, but in the end, I definitely didn't play well. As a result, I had to kill chess. Because they both entered the countdown, there were some mistakes on both sides, and I was lucky to win in the end, it can be said that I picked a game. Regarding the semi-finals, my opponent is very strong, and I have lost several sets in a row. I still can't remember when the last time I won Wang Chenxing. I will try my best in the semifinals. "

Rui Naiwei: I have been fighting hard for this game today, and it was not good from the beginning. Later, when the opponent could take my chess, it seemed that his hand was weak. At that time, my chess was very dangerous. In the end this chess survived, and my chess became better. It was luck. Li He might judge that the situation is good, so he didn't hurt the killer. I can only say that my luck is very good. Xiao Zhou (Zhou Hongyu) is very strong. She should have met me in the first league game two years ago and ate my huge dragon, so my memory is still fresh. In the next stage, it would be nice if you can play chess.

The reporter's questioning phase then began. The reporter first asked Rui Naiwei 9duan: "Following yesterday, sitting here today played net chess and reaped a victory. You mentioned in the opening ceremony the day before yesterday that online chess is an extremely difficult challenge. This time I came to such a sense of technology and modernity. Feelings of online games in an e-sports-style game venue. Have you become familiar with the atmosphere of this game? After the two games, how do you feel about the game in such a venue. Enter the second stage as you wish, your "Master Cup", is there any further goals?"

Rui Naiwei replied: "Because I have bad eyesight, I rarely play online chess at home. There is no way now. I also played online training chess before the game. After the game, I felt like my eyes were going to be blind. But After all, the game is different from training chess. I only have to fight it up, and forget what eyes, whether tired or not. However, I don’t think it will work anymore after the game. In fact, I’m very satisfied to be able to live the next game. I didn’t expect me I can hold on to this day. I don't have any actual feelings yet, and I haven't thought about the future."

The reporter asked Yu Zhiying in the sixth paragraph: In the mid-to-back stage, facing a more difficult situation, he finally offered a calm and combined one-handed lore to kill his opponent. Was it a very early ambush? What was the state of mind at that time. In addition, you mentioned yesterday that your mentality is slightly better than in the first half of the year and last year. Is this kind of concentration also improved? What kind of fighting spirit keeps you persistent and reversed in one fell swoop. Please also look forward to the form of the second phase.

Yu Zhiying's sixth section smiled and said: The two of us in the middle and back games had counted the seconds early. At that time, my opponent and I had reached the last countdown. I haven't seen it clearly, so I can only do my best to calculate. At that time, the opponent played a move that I hadn't counted, and I needed to recalculate it at that time, so I said that I did the calculation. Regarding concentration, my concentration may be better than last year. There are not so many distracting thoughts, so let's work hard in the second stage.

Such a direct question caused the two of them to cover their mouths and laugh. Yu Zhiying first replied: "I will definitely go to the semi-finals with a learning attitude. I have lost more against Wang Chenxing, and now I can hardly remember when I won her last time. As for the semi-finals, I will try my best. Let's play the game well. I don't want to do anything else." Wang Chenxing also said with a smile: "Now that the Chinese chess players have taken the top four, the semi-finals should not feel that much pressure, and it will be easier. Enter the semi-finals. I don’t have many opportunities to play, I hope I can play well, and I hope I can win."

The second stage of the 2020 3rd Wu Qingyuan Cup World Women's Go Tournament will be held from November 30 to December 4. The semi-final matches are: Rui Naiwei vs. Zhou Hongyu, Yu Zhiying vs. Wang Chenxing. After dormant for more than half a year, the Chinese female players Zhenhu flew high, and they were filled with jasmine-like smiles. Looking forward to the second stage two months later, they will be in a better state and perform more perfectly.

MYMEMORY WARNING: YOU USED ALL AVAILABLE FREE TRANSLATIONS FOR TODAY. NEXT AVAILABLE IN 09 HOURS 43 MINUTES 47 SECONDSVISIT HTTPS://MYMEMORY.TRANSLATED.NET/DOC/USAGELIMITS.PHP TO TRANSLATE MORE