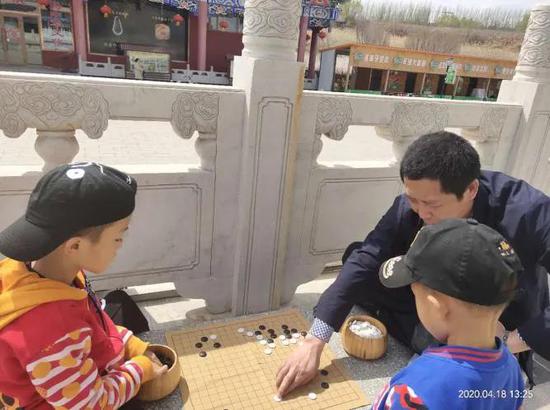 I am the mother of seven-year-old chess player Feng Yiyang. Let’s share an experience of learning chess. Although my son is not the best at learning chess in his class, in my heart, he is my proudest son.

Today's children have eighteen martial arts, which makes us as parents often feel confused. Go is the only one I have retained after enrolling my children in five or six interest classes. This is not my decision, it is my son's insistence.

At the age of 7 this year, he has been learning Go for nearly two years. At first, I didn't know much about Go, I just wanted to find a hobby for my children. I started to learn chess with the attitude of "being able to play chess". I felt that the boys were good at learning Go and could develop their intelligence.

After studying for a while, my son told me: "Mom, I already know how to play chess, but I still want to play good chess. I want to be a general to fight, and I want to take my soldiers in line." The child told me, on the chessboard He is a general, and he will take soldiers (chess pieces) to win the battle on the chessboard. But this victory is not easy to win. He often loses with tears in his eyes, and I can't bear to watch him continue to lose, saying that his son is no longer good enough to win. But my son told me: Mom, the teacher said that you can only become a master if you lose a thousand games, and I can definitely win the battle.

In the process of learning chess, I also had the idea of ​​giving up many times, because the child did not achieve the result I wanted, but my son still told me eagerly, mother I like to play Go, so let me play.

His son is a little reserved and timid, but the teacher always guides and encourages him with great patience. I tentatively asked the child: Do you still like Go? Do you want to learn? Surprisingly, the answer is yes, mother: I like it, I want to learn! This makes me a little sure, the little one must have found fun in Go, he already has the heart to persist.

From the start, he could play a game of chess alone. I was so happy, as if I had won the big prize, I called and shared it with my child’s father and sent it to WeChat Moments. He always loses chess and will wipe his tears after losing. The teacher told me that this is a common experience many children have on the way of learning chess. Most boys learn Go, but the tears of boys are very cute. After going through a process of losing, losing, and losing, he started to have time to win chess, which made him more interested in Go. When talking with people, he will talk about his favorite Go game, and his eyes will also show a proud look.

In July 2019, my son participated in the Urumqi Go grading match. The scene of the game that day has made me unforgettable. At the age of 6, he entered the field from 10 in the morning and did not come out until 5 in the afternoon. He had to complete 7 games with different players in one day. This is undoubtedly a big test for the child's willpower, and I am worried that he will not be able to persist. The day of the game finally ended. When I saw a group of young chess players of similar age walking out of the game in succession, the charm of Go shocked me. Go is a test of children's thinking ability. This hobby is different from others and cannot be forced.

The development of Go in Xinjiang is relatively late. There are still many children who are keen on Go, just like shining stars. My son is one of them. I am proud of him!

Here I would like to thank the child’s Go teacher in particular! Thank you for your patience in teaching, from the cultivation of interest to the professor of knowledge, the ingenuity and inheritance are reflected everywhere! In the child's childhood, meeting a good teacher, a hobby, a group of friends with similar interests, this is the brightest sunshine!